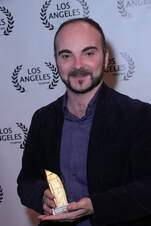 Vincenzo De Sio​
Vincenzo De Sio was born in Italy in 1981. He graduated in cinematographic disciplines, especially production and directing at the "Scuola Cinema Roma" 2006 class. He produced and directed various short films, documentaries and music videos and is active both in Italy and in the New York City area. From 2017 he starts working as a producer of animated short films. In 2018 and 2019 he produced "Filmesque" and "Beatrice", he also is a photographer and from 2019 he stars "Autumn Tactics" a photo project in New York City. Vincenzo won various awards all over the world as a producer, director and photographer.